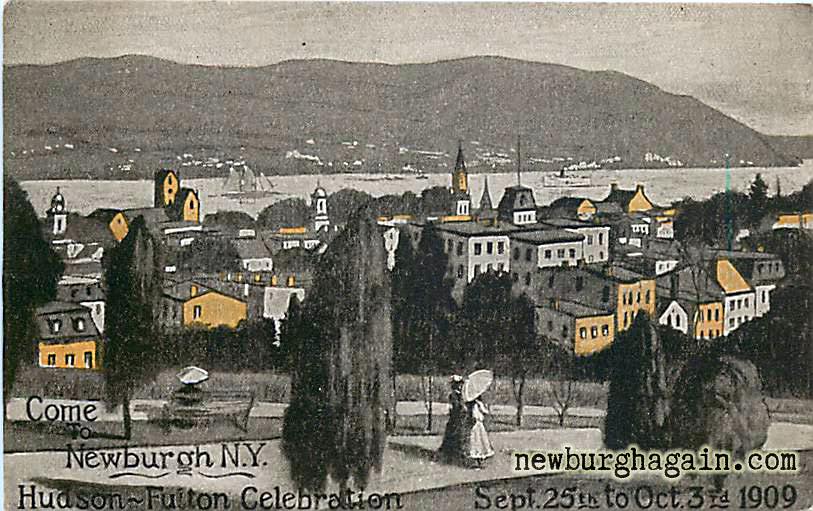 A highlight of the 1909 celebrations was a regatta in the Newburgh Bay with fifty ships of all sizes and descriptions, including replicas of Hudson’s Half Moon and Fulton’s Claremont. Judging from the postcard below, they were joined by blimps, balloons, and the Wright Brothers’ Flyer (the first flight was in 1903), although the this last appearance is otherwise undocumented!

Henry Kirke Bush-Brown (1857–1935) was a distinguished sculptor raised in Newburgh (and the adopted nephew of renowned sculptor Henry Kirke Brown, another Newburgh resident).
For the Hudson-Fulton celebration in 1909, he created an equestrian statue of General Anthony Wayne, an American Revolution general, which was dedicated in a grand fashion.

Eugenia Boisseau recalls the Newburgh 1909 celebrations 50 years later by saying:
“In Newburgh that afternoon the equestrian statue of Gen. Anthony Wayne, which still stands on the east lawn of Washington’s Headquarters, was dedicated. 1500 persons attended the ceremonies with the sculptor, Henry K. Bush-Brown of Balmville, giving an address. The presiding officer was Mayor McClung. Howard Thornton, President of Washington’s Headquarters Board of Trustees, formally accepted the statue. Music was provided by Alsdorf’s Orchestra. The Rev. Alfred J. Wilson, pastor of the Unitarian Church of Our Father, delivered the invocation, and the Rev. John Huske, rector of St. George’s Episcopal Church, gave the benediction.”
Although Eugenia Boisseau’s recount states the was still standing on the east lawn in 1959, A. J. Schenkman states in his book, Washington’s Headquarters in Newburgh, “that the statue was never bronzed, so by 1910, the sculpture deteriorated due to exposure to the elements without protection.”