Gifts for your
favorite Santa
Open Every Night Till 9 Thru Dec. 23rd
December 1978
Here’s to an old-fashioned holiday, sharing good times and good cheer, with lots of friends and loved ones.

Savings and Loan Association of Newburgh

Newburgh is a Christmas Wonderland…

Glittering with the Bright Lights of the Mid-Hudson Valley’s Leading Stores. 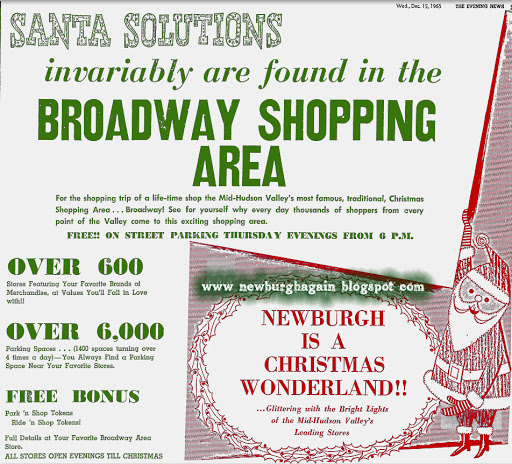 SANTA SOLUTIONS invariably are found in the BROADWAY SHOPPING AREA

For the shopping trip of a life-time shop the Mid-Hudson Valley’s most famous, traditional, Christmas Shopping Area… Broadway! See for yourself why every day thousands of shoppers from every point in the Valley come to this exciting shopping area.
The HOME of
Artistic Furniture, Beautiful Rugs
Good Crockery, Dependable Stoves

1912 brings the 30th anniversary of the foundation of our business in Newburgh.

30 years of earnest endeavor to build up and grow through honest merchandising. And we, like Topsy, “have growed”. As the- years rolled by, three generations of Orange and Ulster County citizens—fathers, sons and grandsons have been added to our list of well pleased and satisfied customers.

It’s a long list—If your name isn’t there we’d be pleased to have it.

An honest dollar’s worth of merchandise for your dollar; new styles as fast as the designers turn them out; every garment backed by our absolute guarantee of your satisfaction.

That is our everyday slogan and it’s good any day.

Everything that men and boys wear anywhere excepting shoes.

First City Church To Use Electricity

The First Presbyterian Church here was the first church in New York State to be illuminated by electricity.

“The inspection of the electric light in Newburgh by Thomas A. Edison and others, including prominent gentlemen from New York, Poughkeepsie, and Norfolk, Va.,” is detailed in account in the Daily Journal, dated April 25, 1884.

One of the sites inspected was the church at South and Grand Street, now Calvary Presbyterian Church.

The century-old report came to light as the Historical Society of Newburgh Bay and the Highlands and Central Hudson cosponsored the centennial of the first electricity in Newburgh.

The newspaper listed the visitors, a veritable who’s who of the business and financial leaders of the era. They arrived at 6 p. m., according to the report.

Understanding the electric station in Newburgh was a model one, they wanted a close look. The Poughkeepsie contingent was considering organization of a company there to adopt electric light.

After supper at the “United States Hotel” (later the Palatine), visitors walked to the Montgomery Street electric plant and then to the church.

The lights were turned on and they were praised by the visitors as very fine and brilliant.

The century old account continues: “Mr. Edison remained at the electric building, to converse with Mr. T.C. Conant, the electrician in charge, and other gentlemen.

“Mr. Edison, the great inventor, is a gentleman of ordinary appearance. He dresses in plain black, and wears a square-crown black hat. He is an incessant smoker, and during the animated conversations that he had while here a fragrant Havana contributed toward making him at ease.

“He is a ready conversationalist and when in conversation his countenance is illuminated, and a glance at in convinces the ordinary observer that he is a man of great brain power.”

“That he understands the working of electricity thoroughly goes without saying. He was very highly pleased with his visit, and complimented the gentlemen attached to the station here for the thoroughness of their work. He did not suggest improvements in its conduct, as the requirements had been well met. Other gentlemen spoke very favorably of the workings of the electric light, of its great merit, and the complete manner in which it was controlled and managed.”

“The visitors returned to the United States Hotel after their tour of inspection, held a brief conversation among themselves and a few Newburgh gentlemen, with whom they were acquainted, and then took the $.10 boat for Fishkill, the two parties separating at that place, and returning to their respective destinations, New York and Poughkeepsie.”

The Rev. Carlos Lantis, current pastor of Calvary Presbyterian Church, researched the material and church secretary Betty Schoonmaker typed the information from a microfilmed copy to submit the material to the Evening News – helping to recall references of Newburgh and the historic edifice.

TOWN OF NEWBURGH – The North Plank Tavern is alive and well after more than 100 years. With a couple of enthusiastic owners and a recent decision by the Department of Transportation to spare it, the building’s future seems secure.

The structure was the most ambitious acquisition of Thomas and Lucie Costa. Although they bought a restored five area buildings before this one, the North Plank Road purchase has become their home and business.

The owners are attempting to have the tavern listed on The National Historic Register.

Its alleged historic value is partly responsible, for the Department of Transportation’s decision to take six private homes across the street for a road-widening project and spare the bar.

The process of getting on the National Registry may end in 1982 with the North Plank Road building receiving the official designation.

The ponderous process started in 1980, involved a large amount of research by the owners, Thomas Costa and his wife, Lucie Provencher Costa. The youngest member of the Costa beverage family, Costa is the son of county Legislator Joseph Costa, who runs the soda plant of the same name.

Thomas Costa studied mathematics and education in college and his wife, a native of Montreal, studied civil engineering. They’ve combined forces to make use of what they call an opportunity unique to Newburgh.

Newburgh is one of the best places, they say, to find a beautiful, historic building at a very low price that can be turned into an exquisite, livable structure.

The first building the couple restored was on Grand Street. After facing the horrible state the structure was in, the Costa said the rest of the houses they acquired and refurbished were easy.

The Costas say restoring old buildings is a help to the community. They pointed out that the Farmworkers Legal Services was going to move to Poughkeepsie until t he group approached the couple and asked about renting a Liberty Street house. Getting a good deal from the couple convinced the agency to stay in Newburgh, the Costas say.

The couple hopes to turn the latest acquisition into a restaurant. The tavern now offers a selection of beer and folk-oriented music on weekends. With a new stove, they hope by next summer to offer food with a French flavor.

The move to a restaurant has taken them since 1979 when they bought the building. Financing for a restaurant was difficult to find, they explain. The Newburgh Savings Bank was willing to help them.

Financial help was not all the couple needed. An incredible amount of physical labor was done to get the structure into shape in1979.

Its claim to a place on the National Historic Register apparently begins in the 1850swhen the tavern was said to be a hotel and meeting place. During Prohibition the establishment became a speakeasy. Gambling was most likely part of the building’s appeal. It was also rumored to have a bordello operating out of some rooms.

Politicians and gangsters frequented the spot. Within its walls, alcohol was diluted and bottled with counterfeit labels.

The Costas have benefited from the fact that the previous owner, Anthony Nixon, never threw anything out. The results are displayed in the walls of the tavern, including hand-embroidered hankies on black felt and decades old business cards.

Newspapers, one proclaiming “Beer is back” (March 23, 1933) also decorate the walls. These were not saved as precious souvenirs, said Costa, but were used as padding under linoleum. The couple can tell by the dates on the newspapers when the work was done.

The ornate wooden bar back originally stood at the United States Hotel on Front Street. It is believed to be 150 years old. It was brought into the tavern around 1910.

All in all, the Costas say they have found a link with history, a home, and a livelihood, “Newburgh is working,” said Costa. “It’s been good to us.”

-136 Broadway, Newburgh. Local and Long Distance Telephone. Joseph F. Sculley, proprietor. Mr. Sculley has made his name one that is well and favorably known during the fifteen years that he has been established here in his business. He keeps a lunch-counter that can’t be beat and that it is appreciated need only to be seen to prove that, for it is always comfortably full. The fine pool-parlor that forms another department of the business contains a and some pool table and is well patronized. The stock of wine, liquor, etc., is a large one and to be properly appreciated must be tested. An especial attraction in this cafe is Ballanatine’s Celebrated Beers, which are always on draught. A choice line of fine cigars is kept in stock for the patrons who appreciate “the weed.” One genial clerk is employed.